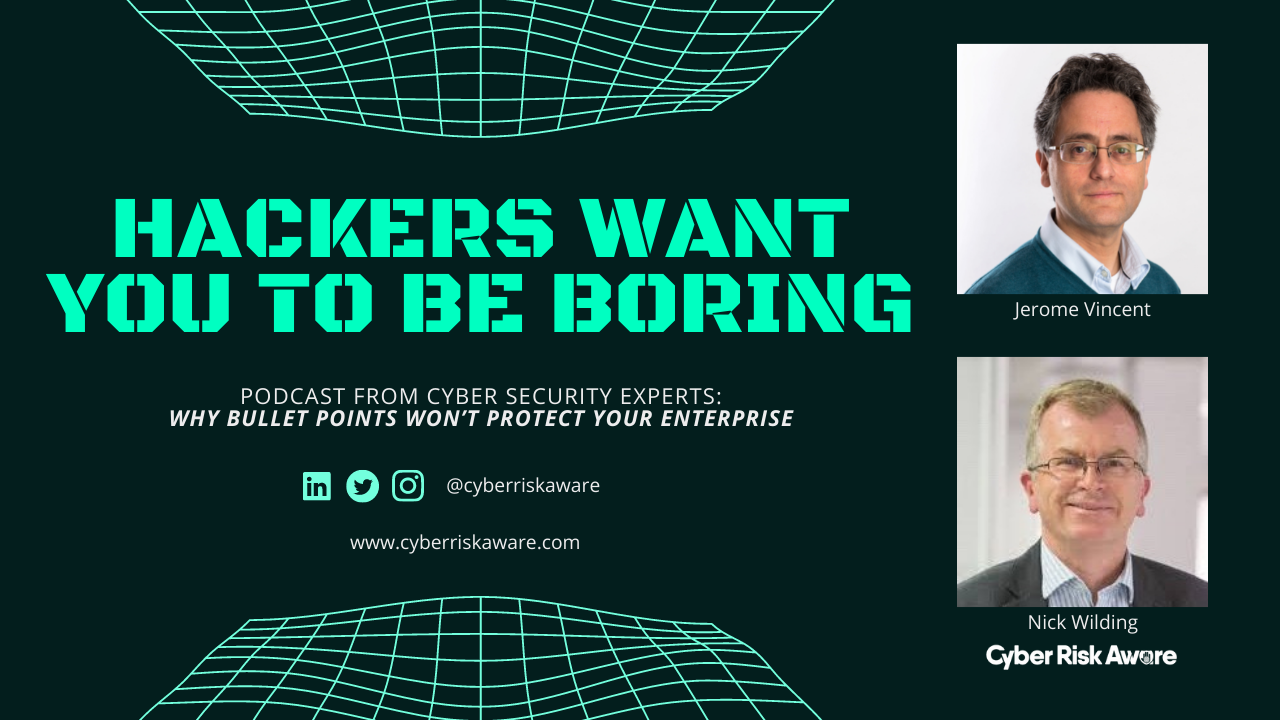 Click here to listen to Nick and Jerome discuss stories and cybersecurity training in our short podcast on YouTube.

Hackers want you to be boring

By Nick Wilding and Jerome Vincent

How does this grab you?

Would you click? You might be mandated to, but you’ll put it off till you’re not so busy. But you’re always busy, so you’ll make a note of the training and promise yourself you’ll get it done. And if it’s tracked – i.e., the system knows whether you’ve engaged with it or not – then you might even open up the link and let it run while you read that report you’ve also been putting off. People do. Of course, they do. So why not?

“That’s what happens with all of us in all kinds of organizations,” says Nick Wilding, Chief Innovation Officer at CyberRiskAware, who specialise in providing targeted security training in real-time and at the very point of need when someone does something risky. “We provide training moments that really matter – making that message a memorable and human one. Simply, it’s a story that sticks.”

And stories are the point. Many cybersecurity training specialists argue for the use of stories rather than bullet points. They advise that dry, technologically focused and densely argued training manuals don’t get across the real-life consequences of the threats which every organization and individual faces on a daily basis. We agree. Bullet points don’t hack it. And so, hackers thrive when cybersecurity training gets boring.

“There’s so much scope for creativity in this subject,” stresses Nick, “I mean, we’re talking about criminals, villains, secrets and lies, as well as the loss of huge fortunes, reputations, and even possible widespread blackouts and social chaos. It’s a huge opportunity to get creative!”

He’s right. So, let’s rewind and start the example we opened with again. But this time – as a story. One with a human focus and, of course, human consequences which the audience can relate to immediately.

We can do fiction:

“I’ve commissioned short stories like that and sent them out so the audience could read them when they wanted to. You could record them like an audiobook too,” says Nick, “That’s a good way to link cyber threats to human consequences for the individual as well as the organisation, and then link it to human concepts like trust and resilience.”

We chose the example of Robotic Process Automation software used to ease workflows in, for instance, accounting or HR departments where sensitive data and money are involved, for a very good reason. They can be hacked too. And when they are, a lot of money can go astray. Bots like these are given high-level credentials so that professionals, like Peter in the story, can avoid mundane tasks and focus on higher-value work.

But creating bots – in effect, software robots – and giving them the credentials to authorise invoices or purchase orders can be risky. There’s no reason NOT to use the technology, but there is every reason to ensure that it is secure. And that takes training.

Focusing training on the right audience and then making it compelling and memorable is vital. That’s why you need to use stories. “Why not have some fun, add creativity to the message, entertain the audience?” asks Nick. “When you do one or all of those things then you get their attention, and the message gets through. That then protects them and the business.”

Software robots hacked by a villain with the ability to send out immense amounts of money!? Umm, sounds like a plot for a new Netflix series…

Listen to Nick and Jerome discuss stories and cybersecurity training in our short podcast on YouTube.